After redesign and years of work, Lithia Park retreat reopened to the public on Saturday

Rain drops couldn’t dampen the jubilant mood Saturday as more than 2,000 people walked through the gates of the Ashland Japanese Garden to celebrate its reopening.

Michael Black, director of Ashland Parks & Recreation, took Ashland.news through a tour of the enclosed gardens — there are six total — and talked about the process of reconstruction over the past two years, building on a concept in the works for the past seven years, and the beautiful outcome unveiled Saturday.

The $1.6 million garden renovation was funded primarily by $1.3 million from Jeff Mangin, a member of the Parks Foundation, and the family of his late wife, Béatrice Marechal, in Normandy, France, as well as other donors. The city of Ashland provided donations of  in-kind labor but no cash, according to Black. Toru Tanaka, former director of the Portland Japanese Garden, designed and helped build the space.

Mangin honored his late wife during the reopening ceremony Saturday.

“My hope is that it can be a special place, a place of silence, beauty, tranquility and spiritual renewal for those that visit,” Mangin told the crowd.

Mangin pointed out that the Kanji characters on the front entrance to the garden translate to “healing.”

“She would be happy to know we have created a healing garden in Ashland,” Mangin said, his voice breaking. “I hope it will be for everyone that passes through these gates.”

Mangin also emphasized that the garden is a space for all who call Ashland home and is welcoming to all visitors.

“We chose the name, Ashland Japanese Garden, for a reason,” he said, “because it belongs to the whole community. It is our garden and it will always be that way.”

Mike Gardiner, a former longtimeAPRC Commissioner and member of the Parks Foundation, as well as Rick Landt, current APRC chair, and Black welcomed the community into the gates.

Prior to the reopening, Black led Ashland.news on a tour of the grounds.

“You start off with the natural garden and then you come up to a bamboo garden,” Black said. “And then over here, we’ve got some pines and maples, the creek and the pond together and then the sand and stone garden, or Zen garden.

“We’re just really excited for everyone to see it,” he added.

Koi fish are planned for the pond in the spring.

Mangin and Black worked together starting in 2015 on the process to find a designer to redesign the garden and also worked with the Southern Oregon Japanese Association to make the space as culturally appropriate as possible.

“In order to build the garden, we had to do some digging up of some existing infrastructure and there some trees in here that had to go as a result of that,” Black said.

Black said the biggest issue that came up with the redesign was whether to remove two large Douglas Firs, but pointed out they remain standing tall in the garden today.

“They’re here and they’re part of the garden, as we love ’em,” Black said.

The trails, creek and drainage from the previous garden had to be replaced.

“A lot of the vegetation wasn’t doing so great,” Black said. “To make change, we had to take out some of those things. But as you look around, you can see … the most dominant thing in the garden are the big trees that were here before.”

“To get a garden that was truly a healing garden, we had to create something that didn’t inspire animosity within people,” Black added. “So we compromised on several things and that’s how we got to where we are.”

Visitors appeared thrilled with the space, and lined up in the rain throughout the afternoon to see it up close.

Among them were Vincent and Myrna Haynes of Ashland. The couple used to show off the former garden to guests when they were in town.

“We saw the old and now we see the new,” said Vincent, who snapped photos of the pond at the bottom of the gardens.

His wife, Myrna Haynes, joined him. Both glowed at the opening. They remember the garden as it was when they arrived in Ashland in 2010 but both beamed at the redesign.

“I love the whole thing,” she said.

The Ashland Japanese Garden is currently free to all visitors and open 7 a.m. to 7 p.m. For more information, go to the garden’s new website at ashlandjapanesegarden.org. 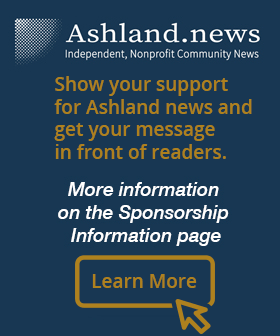