By Art Van Kraft for Ashland.news

Historic Buckhorn Springs Resort has been purchased by an international corporation with new ideas and a new plan for the future. At a recent open house, the new owners welcomed the public to take a look around at the 124-acre resort on Emigrant Creek about 9 miles south of Ashland. Only a scattering of guests showed up, but those few had a robust interest in the future of the springs — a future that could include use as a retreat for the therapeutic use of psilocybin mushrooms.

The retreat, first developed in the 1890s by James Tolman, according to the Oregon Encyclopedia, was purchased by the Synthesis Institute, through a state corporation known as Oregon Retreat Centers, in June 2021 for $3.6 million dollars. Synthesis is a Netherlands-based company that runs psilocybin retreat centers near Amsterdam.  The company has been involved in Oregon’s psilocybin world since well before Measure 109 passed in 2020, making Oregon the first state in the country where people can legally consume psilocybin, the active ingredient in “magic mushrooms.”

Unlike the ballot measure that legalized the use of cannabis, Measure 109 legalized the use of psilocybin only in state-regulated centers, where adults can take mushrooms under the supervision of licensed guides. One of the company’s founders, Myles Katz, moved from the Netherlands to Oregon in 2020 to find a location for the retreat and set up shop.

“Buckhorn Springs is a great historic location for our operation,” he told Ashland.news. “We have facilities for multiple experiences here, not just psilocybin services. We will be a space for hire with workshops, yoga retreats, seminars and even weddings.”

Katz said six acres are designated as a historic site, due mostly to the work of the previous owners, who restored Buckhorn Springs to the healing center it was in the late 1800s. The main lodge has eight bedrooms with a commercial kitchen and a communal dining room. There are 11 cabins scattered throughout the property.  Most are for short-term guests.

“Our main strategy is to host events and retreats that offer transformation or improvement,” Katz said. “That includes new options for improving mental health outcomes under Oregon’s legal psilocybin legislation.”

Katz said a three-day retreat will involve a group ceremony at one of the remodeled pavilions. Participants will be given a dose of psilocybin and lie down on mattresses. They will all wear blackout eye masks during the experience while music plays. Katz says the event will not be cheap. The low end, he speculates, will cost more than $1,000 for a three-day stay.

Buckhorn Springs psilocybin operation, however, could be shut down before it even gets off the ground. Measure 109 has a provision that allows counties to put implementation of the measure to a vote in November. Jackson County Commissioners might do just that, and it’s made many local investors nervous.

The County Commission will begin hearing public testimony on July 19 to allow the public to weigh in, but the ballot measure is a foregone conclusion at this point, according to Katz.

“If Jackson County is to opt-out of the legal psilocybin services, Buckhorn Springs will remain open as an event-for-hire space to be utilized by groups for seminars, workshops, yoga retreats, business meetings, weddings, and personal retreats,” Katz says.

One of the resort’s more unique phenomena are the mineral springs that produce carbon dioxide.

“Carbon dioxide produced by the vapors from the spring has no oxygen,” Katz explained. “When there is no oxygen, your blood vessels dilate and create vascular dilation, a medical procedure for healing blood pressure and circulation problems.  Your skin gets warm and tingles because your exposed parts are devoid of oxygen. Native peoples were known to take wounded warriors here to help healing.”

Ashland resident Dylan Shelton was one of the few people who came to look round at the open house. He said he is a historian preparing a study of local springs.

“One of the specialties of our region is the mineral springs,” Shelton said. “They are profoundly valuable to people who live here. This is a soda spring, but also a vapor spring, which is extremely unusual because the carbon dioxide gas comes out of the ground. People would lie down in below-floor level, coffin-like boxes and expose themselves to the vapors that do not contain oxygen. Certain conditions can be healed by taking away oxygen from the skin.”

Nathan Tinder and his wife Shannon were two other visitors at the open house. They own and operate Sacred Living, a healing center in Ashland. The small group was given a special tour of the buildings, including one that is off-limits to guests. It’s a long, low wooden building that had housed the below-ground carbon dioxide treatments. The room has a row of seven coffin-like wood boxes that can hold one person just low enough to expose the body to the gas. The doors are closed over a head opening above the gas to avoid asphyxiation.

“It feels like my whole body is tingling and I’m on niacin. A flushing effect; I’m sweating and feel invigorated,” Tinder said.

Shelton also joined the experiment and survived to write about it.

Art Van Kraft is an artist living in Ashland and a former broadcast journalist and news director of a Los Angeles-area National Public Radio affiliate. Email him at artukraft@msn.com. 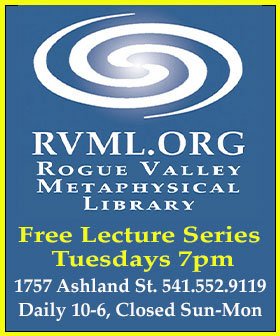